Bunkley Electric Company was founded on February 17, 1962 by W.D. “Dub” Bunkley after he and his wife, Joyce, moved to Abilene from Stamford. The company was run from a home office with one truck adding employees throughout the years as needed to keep up with the demand for access to electricity to accommodate larger homes and evolving technology. Bunkley Electric employees worked throughout Texas, Oklahoma and Arkansas for businesses such as GTE/Verizon surviving the ups and downs of the economy when many of their competitors did not. Dub retired from Bunkley Electric in 1988 leaving the company in the capable hands of his sons, Garry and Terry, both master electricians. Garry became President of Bunkley Electric and is proud to have been involved with some large local projects over the years. Some of these include Trinity Baptist Church in Big Spring, First Central Presbyterian Church, Abilene’s first Walmart stores, Ward Elementary, Thomas Elementary, and a renovation at Abilene High School. Terry Bunkley, who was involved in all of these projects, considers the running of cable and conduit a type of artwork whose beauty cannot be appreciated because it is hidden behind ceilings and walls. Brent Bunkley joined Bunkley Electric in 1995 taking a brief hiatus to attend college at Texas A&M. He received his master’s license in 2012 and worked as an estimator until Garry’s retirement in 2014 when he bought the company and became Chief Executive Officer. Brent’s vision to succeed involves staying on the cutting edge of technology which includes the installation of solar panels and lighting that is cleaner and more efficient. According to Dub, electricity is something we can’t get along without and Bunkley Electric will continue to be around for years to come to help you keep the lights on. 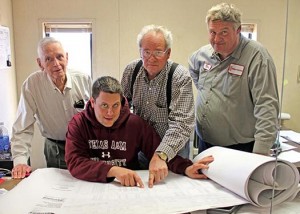